What to Eat for a Saucy Evening: an Introduction to Aphrodisiac Foods

Since the days of the ancient Romans, men and women have looked to food to enhance their sexual prowess and stimulate desire. Known as aphrodisiacs after Aphrodite, goddess of love, the efficacy of these libido-boosting edibles has long been disputed, but that hasn’t stopped people from making them the centerpiece of many a night of romance.

Thankfully, the more exotic so-called aphrodisiacs – Japanese blowfish, anyone? – won’t be found in your local supermarket. But plenty of other foodstuffs are readily available which can potentially help you rise to the occasion, and in many cases there is scientific evidence to back up this claim.

Your GP might warn you against eating too much red meat, but your love doctor would say the opposite. Apparently there’s nothing like a nice, juicy steak for stimulating levels of dopamine – a neurotransmitter associated with feelings of reward and sexual gratification.

Meanwhile, there are plenty of options for vegetarians. Chilies contain capsaicin, a chemical that excites the nerve endings, while watermelon is a source of citrulline, an amino acid which wards off fatigue and aids blood flow – both very important if you want your evening to go off with a bang.

Said to have been favoured by Madame de Pompadour, mistress of King Louis XV, celery contains chemicals which are reckoned to increase libido in women. Although be warned, ladies, snapping a stalk between your teeth too firmly is probably a good way of scaring off a guy.

And for dessert, what else but an old favourite? Chocolate brims with chemicals which increase serotonin levels in brain, making it the ultimate feel good food, triggering feelings of elation and well-being.

Refreshments with a raunchy reputation

Looking at the most famous aphrodisiac fare, one can’t help but notice how many of them bear a striking resemblance to parts of the human anatomy. However, that’s not the whole story. Asparagus has a distinctively phallic shape, but it’s also packed with Vitamin E, which aids in the production of hormones that can put you into a sexually responsive state. Bananas have fruity associations because of their appearance, while also being great for stamina-building potassium.

As for oysters, the very sight of them is enough to trigger lecherous thoughts, especially when coupled with the sensuous way in which they slip down the throat. At the same time, though, they are also high in zinc which can help keep up a gentleman’s sperm count.

And if you want more than a one night stand…

Although there are good reasons for believing that many of these everyday eats can play some part in kindling a night of passion, a more dramatic impact on your love life will require a longer term solution. For instance, the article “How to maintain a healthy libido” has tips on exercising regularly, eating a healthy diet, shedding excess weight and other ways to spice up your evenings such as joining an adult dating site. That said, few can resist the fascination of aphrodisiacs, sharing in an obsession that goes back to the dawn of civilisation.

Arnott’s are at it again…unfortunately. The mango Tim Tams are another exercise in fake flavouring, and the lemon flavour in the Scotch Fingers is almost non-existent. Sigh. 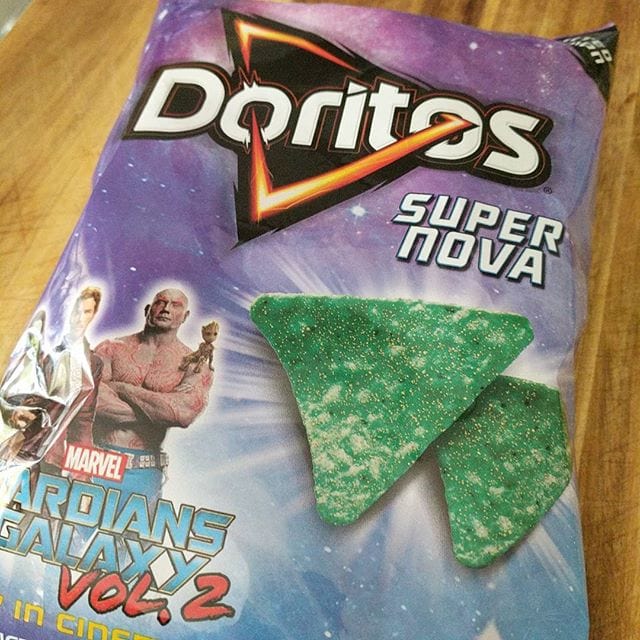 These limited edition green Doritos are lime & pepper flavour, which is a surprisingly accurate description and I quite like the taste. Colour-wise they are almost blue, however, and that’s just not right