Ice cream for me is a bit like crisps (ok, potato chips) – I have my favourites (can’t resist a good mint-choc-chip or cookies & cream) – but I really like to try new & interesting flavours. There have been a few attempts by local manufacturers to change things up – the underwhelming Connoisseur Australian Collection springs to mind – but the increased availability of Ben & Jerry’s has finally brought true ice cream creativity to the Australian masses.

Ben & Jerry’s has quite a decent Australian website – I’m guessing that it’s a much more high profile product in the Eastern States. I was surprised to find 25 locations stocking the product “near” me in Ellenbrook, although they’re mostly service stations, video shops and small supermarkets. There’s no “Scoop Shop” in WA yet, hopefully it’s just a matter of time. Be sure to sign up for their “Chunk Mail” newsletter if you visit the site.

Anyone that’s been tempted to try Ben & Jerry’s in Australia will probably have been shocked at the price – everywhere I’ve seen it charges AU$11.95 (about US$10.60) for a 458ml tub. Not only is this very expensive, it’s even more insulting when you learn that in the USA they pay only US$3.50 (about AU$3.90) for a slightly larger 473ml (where does the other 15 ml go?) I really wonder about the price point in the long term – I’m probably willing to spend more than most to try new things, and even I consider it an extravagant purchase.

Today I’m trying the curious Couch Potato (vanilla ice cream with a salted caramel swirl & chocolate covered potato chip “clusters”), which is known in the USA as Late Night Snack – it has a slightly different description but the name seems more appropriate.

Unfortunately I was a little disappointed. The flavour of the vanilla ice cream wasn’t particularly strong, and there’s not a great amount of caramel to be seen. It’s all about the clusters – crunchy and (very) salty they definitely are. I don’t know that if I’d identify them as potato chips if I hand’t been told beforehand. This feels a little like someone had the idea to use the chips and then looked for something relatively plain to throw them into where they would stand out like the proverbial. They certainly succeeded, but it doesn’t feel like a harmonious flavour combination.

There are a few more flavours I’m keen to try (Clusterfluff and Phish Food are next on my list), but I will always find the price rather hard to swallow. I also look forward to one day sampling their new “core” varieties, which have apparently been available in the UK since 2012, but only recently launched in the USA.

This seems a little excessive, but sometimes you just have to go the extra mile to protect what’s yours. Just hide the kitchen knives and you’ll be fine. 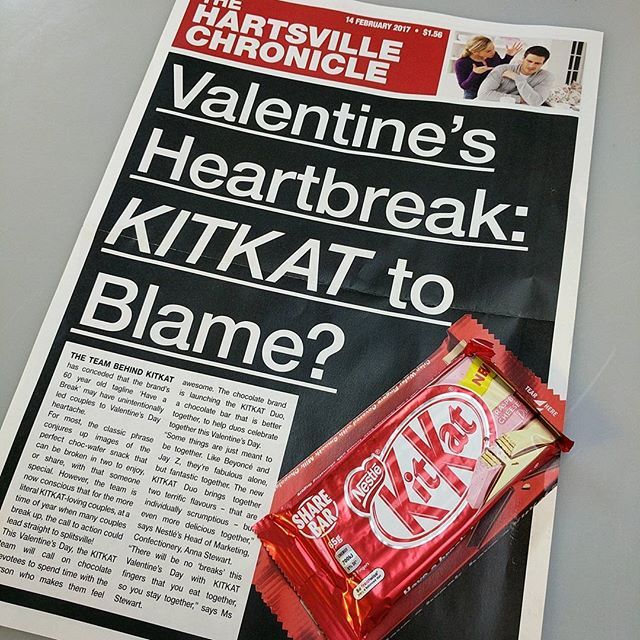 How nice of KitKat to send me a Valentine’s gift! The new Raspberry Cheesecake and Tiramisu “duo” varieties are perfect for sharing with your other half (I’d suggest buying an extra one and hiding it for later!)