I was feeling strangely in the mood for a challenge this afternoon, and decided to attempt a recipe with three components that I was capable of  screwing up: chocolate eclairs. I was tempted to make these after reading Gary Mehigan’s excellent book “Comfort Food” that I picked up for under $25 at Target. Regular readers of this blog will know that I had great success with Gary’s triple chocolate brownies – he’s also the reason I’m considering watching Australian MasterChef this year.

First I made the choux pastry, using the recipe from Gary’s book:

I was happy with my finished choux mixture, and the next step was to pipe twelve eclairs onto a baking tray in 9cm lengths using a 1.5cm nozzle. Not having such a nozzle, I decided to use the so-easy-when-they-do-it-on-TV plastic sandwich bag with the corner cut off. But we didn’t have any of those either. Thankfully I managed to find one that was being used to store some hundreds & thousands, so into the bin they went and on with the show. Perfect! Until the bag split after piping the second eclair.

After a quick tantrum I arranged the remaining mixture in log-shaped lumps using my hands, in a fashion that would no doubt have several great French pâtissiers turning in their graves. With nothing left to lose, I placed them in the oven as per Gary’s recipe at 180C for 25 minutes, followed by 10 minutes at 160C (320F) to dry them out.

Gary’s recipe uses fondant for the chocolate coating but I didn’t have any, so I hit the web for a few suggestions and ended up melting 60ml cream and 200g of Nestle milk chocolate melts over a low heat, then stirring in 2 tablespoons of vegetable oil to produce a glossy spreadable chocolate mixture. For the cream filling I followed Gary’s recipe and whipped together 200ml cream with 50g caster sugar and 1 teaspoon of vanilla extract (in place of the 1/2 vanilla pod).

Against my better judgment, I decided to be fancy and try to inject the cream into the eclairs using my Tupperware squirty thing rather then cutting them in half. I found it quite hard to judge how much to put in; in the end some were underfilled and some disturbingly ruptured mid-squirt. Whenever I’ve seen chefs do it on the TV it never looks like they’re putting much in; now I know why.

So here they are, filled with cream & covered with chocolate goo – and surprisingly tasty. Anyone for a chocolate coated dead hamster? 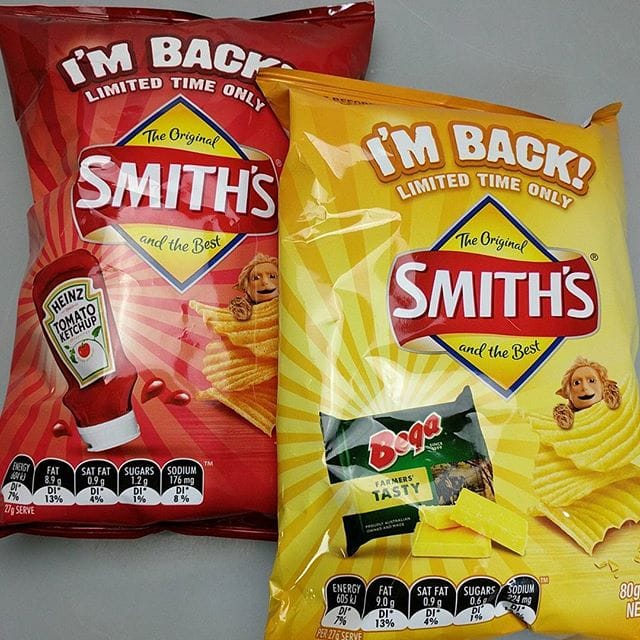 Chippies!! Smith’s have brought some old varieties back, and they’re not a bad effort – at least they resemble the advertised flavours. Out of the two, the tomato ketchup is definitely my favourite, and easier to eat in bulk ? – –

I don’t know if these are on the shelves yet, I had to rip open a box that was buried on a pallet of stock to get them the orange flavour isn’t very strong, but it’s better than nothing! . .

UK crisp lovers – there’s finally an Australian version of Hula Hoops! Find out if they’re any good in my review, now up on Morsels and at theshelflife.com.au

No doubt you’ve seen these by now, either on insta or in person…well, it’s no great surprise that they are very nice indeed! The flake texture of the Caramilk calms down the richness and makes this Twirl both delicious and easy to eat. Let’s hope they stick around – grab them while you can. . #theshelflife #morsels #perth #perthfood #food #foodstagram #foodie #perthisok #pertheats #tasteperth #perthfoodie #perthfoodies #instagood #perthlife #feedmeau #perthfoodblogger #foodblogger #foodblog #caramilk