The thing that really annoys me about Charm City Cakes (from Ace of Cakes) is how little cake they actually put into their creations, many of which seem to be made from mostly foam and wood. Every time I see the episode where they make the “non-edible display piece” for Radio City Music Hall, I wonder why they didn’t just make it from papier-mâché, and get the urge to call consumer affairs. The cakes on Cake Boss always seem much more impressive, both artistically and structurally – although of course we’re talking reality TV here so the truth is probably somewhere in the middle.

Earlier this week I stumbled onto a new 10-part series from the “Good Food” channel that documents the day to day goings-on in Britain’s premiere chocolatier, Choccywoccydoodah.  The name is very British, but it’s not growing on me. I’m certainly glad that I don’t have to email them on a regular basis.

According to its website, Choccywoccydoodah is “an art and design focused chocolaterie based in the bohemian city of Brighton. We specialise in chocolate one-off sculptured fantasies, bespoke wedding cakes using only the finest chocolate and ingredients, chocolate gifts (small and thoughtful, as well as extravagant gestures), birthday cakes with a choice of flavours decorated in chocolate, slabs of chocolate, chocolate fantasy pets, really, really naughty stuff… All in chocolate!”

The first episode establishes very quickly that this small outfit is indeed a master of chocolate. They never use fondant, and all of the staff sign secrecy agreements so that their techniques will never be known by competitors. We get to meet the team – Christine the owner is all mad hair and crazy lipstick; flamboyant Dave is the head designer and star of the show; his assistant Tom is a bit downtrodden and struggling to prove himself; “sex god” baker Jim is channeling The Fonz, and also reminds me of Father Damo Lennon from Father Ted – I think it’s the hair; Texan head of sales and shop Manager Gina just seems a bit boring. And there’s others that we may or may not get to meet later…

In the second episode we see Choccywoccydoodah developing its new autumn collection, and designing a cake featuring a chocolate unicorn for a charity auction – it sells for a whopping 1600 pounds (about 2600 Aussie or US dollars). Dave tries to force folk art on Christine, while Tom finally proves himself with an amazing woodland design, complete with huge chocolate squirrels. Jim makes a gluten free cake, which everyone in the whole of Britain likes except Christine. Poor Jim. Away from the shop, Dave launches his personal art collection in a fashion too disturbing to describe here.

As you will have gathered, the staff are all quite eccentric in true British fashion, and the show doesn’t need to work hard to get that point across. In contrast to its American counterparts, Choccywoccydoodah runs a little slower but gets its message across in its own way. Think old MasterChef vs new MasterChef. The cakes they produce are quite amazing, if a little repetitive in style.

I don’t know whether this show will ever make it to Australian or American screens, but if it does make sure you tune in – just don’t expect to see Christine rocking her bass in the kitchen, ala Duff. In the meantime, check out Choccywoccydoodah’s website to see more of their remarkable creations. 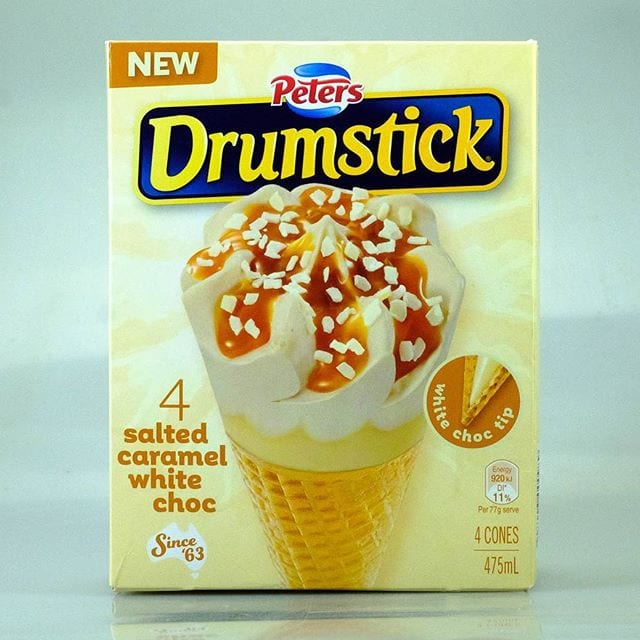 It’s Friday, so why not treat yourself to a box of these yummy new Drumsticks!The white choc ice cream isn’t too sickly, the caramel has the right amount of salt and they’re all round better quality than Cornettos. I’m on my second box, and I found them in Coles today for $5 ? Happy weekend – –

Bumped into these in Coles, presumably there are more “food truck” flavours to come… I love chicken satay, but that’s a bit of a stretch here. The taste is definitely reminiscent of grilled marinated chicken, but I wouldn’t say satay. They were quite edible, though Vegan and vegetarian, too ? @pringlesdownunder @colessupermarkets . #theshelflife #morsels #perth #perthfood #food #foodstagram #foodie #perthisok #pertheats #tasteperth #perthfoodie #perthfoodies #instagood #perthlife #feedmeau #perthfoodblogger #foodblogger #foodblog #pringles

Michel Roux Jr, at your service…

Perhaps the most disturbing thing about these is that the flavour actually works (and isn’t horrible!)